WE LOVE YOUR BUSINESS & THINK YOU RUN A FIRST CLASS ESTABLISHMENT. THANK YOU VERY MUCH.

DO YOU MAKE A BEAD HEAD FLY CALLED POP'S BUGGER? I FISHED WITH ONE IN PAGOSA SPRINGS, CO AND A SMALL STREAM IN NM AND THE FISH REALLY WENT AFTER IT. I WOULD SURE LIKE TO BUY SOME MORE. THANKS

I'm very interested in buying one of your Altima Wading Jacket, It's one of the BEST most functional Jackets I have ever worn. I stole my Dad's Jacket which is a medium and I have been wearing since. I'm an XL size guy Too! but I want one for my own. to my dismay there aren't many dealers aroung my area (I live in Maryland) and I can't go out and just buy one. There isn't much information on Your Website either about it, but I just wanted to know, are there different colors for this jacket? and how can I go about acquiring one? I have no idea how my dad came across his and nor does he remember. I want one! I choose his over Northface, Helly Hansen, Marmot and other outdoor gear company. I've even come as far as thinking about investing in one of those Henry sailing jackets! but they are pickles compared to the Altima. Please Help!.

You provide superior quality in both your flies and customer service and I greatly appreciate it.

Hi Ray, I gave Mike at Wolf Creek one of my samples of the Bearded Clam because his parents were heading out on a redfish trip. Mike's mom landed a 32 pound red on the fly. It would have been a world record had they had a scale. She didn't know the name of the fly but thinks it's a great bug. Here's to the bearded clam! 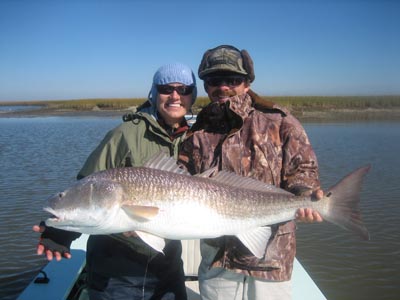 Just wanted to send a quick note and say thank you for the quick turnaround and generous terms on the special fly order. You guys are truly one of the best to deal with in the industry and make my job so much easier when you deliver product when we order it, and deliver some of the highest quality flies in the industry. So Thanks again for your help in making our business a successful one. And by the way, those red fish spoonfly's work great on trout, just keep that one under your hat.

Dear Solitude, I bought your Guide Vest and it is amazing comfortable, roomy but not bulky, I love it. Thanks

World Class Service ! From Mike Ward To Ray Chang Hey Ray, Ordered the flies yesterday, received them via UPS at 1:45 pm today. Unbelievable service. That is why every fly shop and industry professional holds Solitude Fly in the highest esteem. Again, thanks for all you do.

Hey! Just wanted to stop by and tell you how much I am enjoying your products! Im a HUGE fan! Thank you!

Ray and Company, I’ve been in the fly fishing industry for 20 years and I just have to tell you that out of any company in the entire industry Solitude is the most reliable, professional and fastest entity. On a Friday, same day shipped - it’s just unheard of, keep up the awesome work. Many thanks for always coming through in the fastest way possible! Best.

Hi Ray — Thanks for the quick shipment of flies. I was able to fish yesterday on the Upper Owens and I just wanted you to know that those "gummy worms" worked great. When we spoke on the phone last week, you asked if I was interested in trying out any of those flies. Anyway, the proof is in the pudding, they work. As you can guess, they aren't the most durable fly out there but they do attract winter rainbows. With the size of the fish and the fight involved, you are lucky to get one trout per fly. But again, they do work. 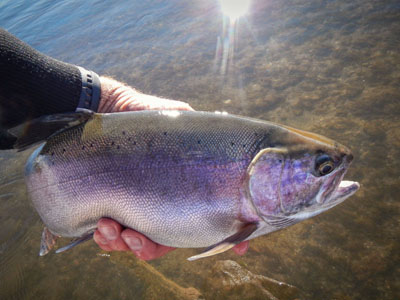 Hi Ray, Caught this baby on the Poundmiester 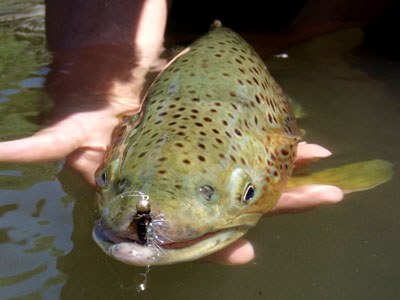 Truly monster brown trout are very efficient eaters. Rather than take insect after insect during a hatch, they consume one meaty meal.

How to Catch Monster Trout

Sweet Release A 24-inch Montana brown makes a splash. Photo by Brian Grossenbacher You want a real, wild trophy trout on the fly—not some pellet-fed, planted, triploid mutant (anyone can get that photo). Your fish has eaten and survived its way to the top of the river food chain, the hard way. So you’d better have your act dialed in. Friday Evening Be on the Internet scouting for “happy” water. All rivers are not created equal, and they change character every day. Very specific criteria will identify the prime hunting grounds. You need water temps that are between 45 and 60 degrees and flow levels that are strong and stable, or falling slowly, not rising. You want good water clarity, but not gin-clear. Don’t rely on hatch or catch reports from the fly shop. You don’t want promo talk—you want the real scoop that can produce a player. Get on some local message boards, see what people who have really been out there have to say, then check the latest ­water conditions (start at ­waterwatch.usgs.gov). Saturday Morning You’re up before dark. You’re already rigged when you get to the river: 5- or 6-weight rod, disc-drag reel, floating fly line, 2X tippet, and a box of meaty streamers. You’ve already tied on a tan or white Sculpzilla. If the ­water is a tad dirty, it’s a brown or black conehead Woolly Bugger. Your best chance of slaying the dragon will happen within your first 20 casts on the first morning, and your odds go down 5 percent with every cast you make. Because that first cast matters so much, you need to figure out exactly where to make it. So: Where would you live if you were a 7-year-old, 30-inch brown trout? Pin it down by identifying all four of these major change elements in one place: changes in depth, in structure, in current, and in water color. If you find a green-to-brown pool with rocks and/or logs at the head, a good sweeping current around the edge, and a pool that you wouldn’t dare wade into, you’re there. Invest the first 20 minutes of daylight by watching the run from the bank. When you’re gunning for trophy trout, you never cast into water you haven’t watched first. Look for a wake or a head that will help you home in on the fish. If you see nothing, your first cast should be a gentle flop, an upstream mend of the line to sink the fly, followed by an almost dead drift, right through the heart of the run. Give that fly a jig action (but not much more) as it bounces along the bottom. If the line so much as stops, gently set the hook. With ­every ensuing cast, add more life and action to the fly. Make cast No. 20 a full-on bank banger, with fast even strips. Add extra time between casts when you trophy fish. Don’t flog the water—you’ll never beat a mondo trout into submission. Wait five minutes between every cast. After 20 casts, with no results, move to the next best run. Midday If nothing happens in the morning, you’re faced with a conundrum. You want to keep covering ­water, but you don’t want to burn good runs. At this time of year, spend the brightest parts of the day working riffle water and edges with a dry-dropper rig. Match the local hatch in both regards (with a dry-fly pattern and corresponding nymph). But don’t burn yourself out: Take a nap, eat lunch, wait for a hatch to happen—and if it does, pounce. The biggest trout will eat cripple patterns in the film on the edges of runs. Follow the bubble lines. Evening It’s time to tune in to the hatch game. Really big trout give up bugs as the mainstay of their diets once they grow over 18 to 20 inches long. But some hatches still draw them out, and you want to at least give yourself a chance if that monster shows itself. Remember the prime holding spots in certain runs, and when the rings start happening, don’t pick your way through the run. Drop the fly in position A right away. If there’s a Hexagenia or drake hatch going on, send pinpoint casts into the mix, spaced a few minutes apart, for as long as you’re seeing the soup boil. When it quits, you quit. Tie on a mouse fly and wait till well after sunset. Go straight back to the target-rich run you fished at daybreak. Cast the mouse fly against the bank, and give it an erratic twitch-strip straight through the heart of the black water. Kill the headlamp to avoid spooking that big predator, and work from memory. Any fish that whacks a mouse after the protein platter of the evening hatch is an absolute glutton. Evening Repeat the process, but slow everything down even more. If nothing you saw on Saturday gave you good reason for hope, get back on the Internet that night and search for another river. Make the move if you feel so inclined. Follow this same pattern from daybreak to after sundown, and remember that sometimes the biggest trout comes on your very last cast. How to Catch Monster Trout 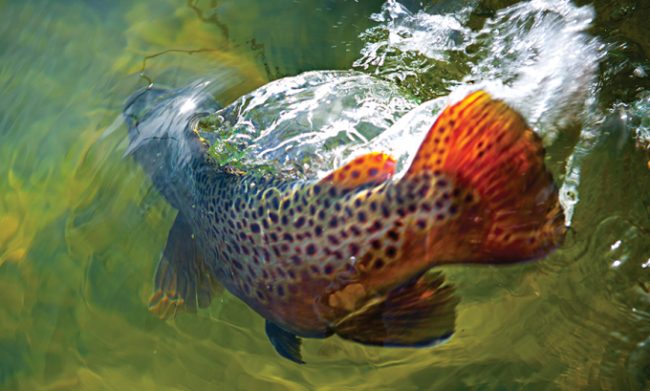 Big fish on a solitude pattern

Mark Shelton was in my shop today and I showed him this picture. One of my customers caught this fish on a #4 White Sculpzilla in Costilla Reservoir on Vermejo Park Ranch in New Mexico. We love that streamer pattern for lake browns! 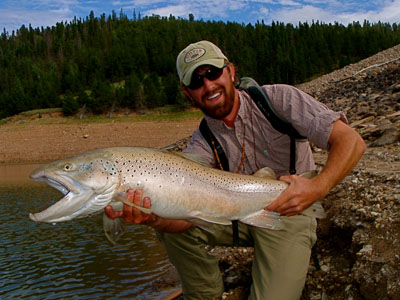